Podcasting may be a digital medium but, for many organisations, podcasts and live events have become intertwined as part of their business strategy. Many creators have turned to in-person shows and live recordings to connect with fans and diversify their monetisation options, and many live event organisers have adopted podcasts as successful marketing channels.

There are a number of reasons behind this trend, and although there are also some considerations that need to be taken into account before integrating live events into a podcast strategy (or vice versa), formats can work extremely well to support each other.

Live podcasts tend to fall into a couple of different camps. Firstly there are those that spring from a desire to maximise a growing listenership. For those people, it can provide a useful additional revenue stream, and take independent podcasters one step closer to ‘living the dream’, according to Matt Deegan, creative director of Folder Media, and director of live events including the British Podcast Awards, the Grow podcasting festival and Podcast Day 24.

“If you’re a smallish podcaster, with less than 5,000-10,000 listeners a week, it’s quite hard to make your fortune from podcasts,” he explains. “But staging your podcast at a theatre once a month, you could take yourself a few steps closer to that in one fell swoop. If you’re selling 50 tickets at a tenner a pop you’re taking home £500 for a night’s work and maybe an episode. And if you do one of those a month, and a bit of Patreon, you can probably get to upward of £1000 a month – and suddenly it starts to be real money.”

In the other camp are those for whom the live experience is right at the core of their podcast. A good example of this is Pappy’s Flatshare, which started back in 2011. Matthew Crosby, who chairs the popular panel show, explains: “We started as a sketch act, so we’ve always had a live background – the three of us doing shows together at the Edinburgh Festival, touring on the live circuit.

“I can’t imagine doing it without an audience – even in the pandemic we had a live Zoom audience.” 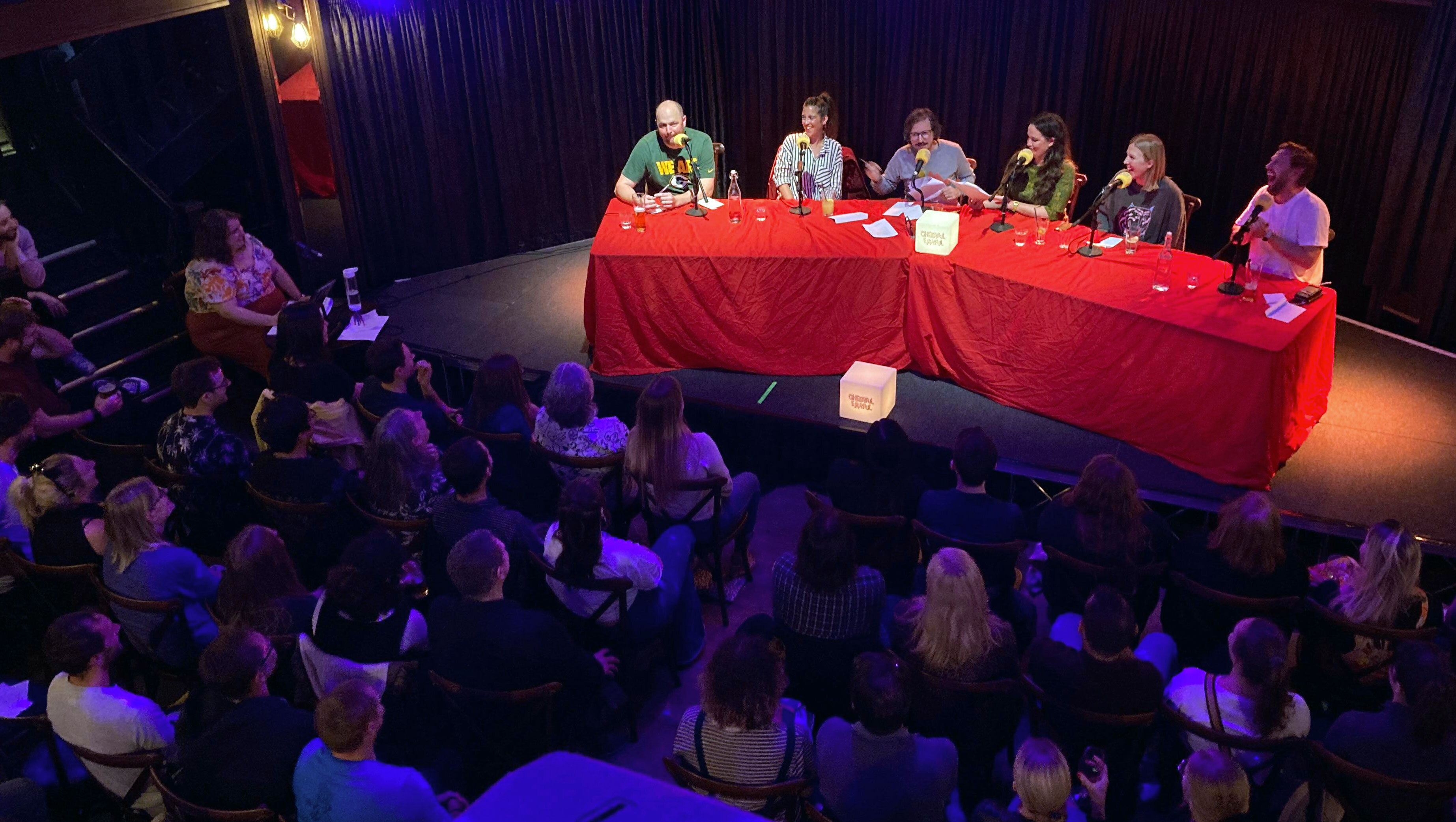 Whichever approach you take, choosing the right venue can make a huge difference. Giles Gear of Giddy Aunt Comedy, which runs the Cheerful Earful comedy-podcast festival, says you can make life a lot easier for yourself by finding somewhere that’s already equipped for your purpose: “A venue that already has a PA system and can even offer you a sound technician and front of house as part of their deal, is a lot easier than a pub with a room.”

What’s more, it can really help to find somewhere with similar values to you. “There are already loads of comedy venues,” says Gear. “If you put your comedy podcast on there, the audience already knows what they’re in for. If you do a science one, go to a famous museum or science-based venue that has a smaller conference room.” And if you pick the right venue, you might find that part of your audience comes with it. “How many people will look at an event listing for somewhere they already habitually go and might think ‘Let’s give this a go’, versus the percentage of the 200 or even 2000 [podcast] listeners that will actually turn up to a show.” 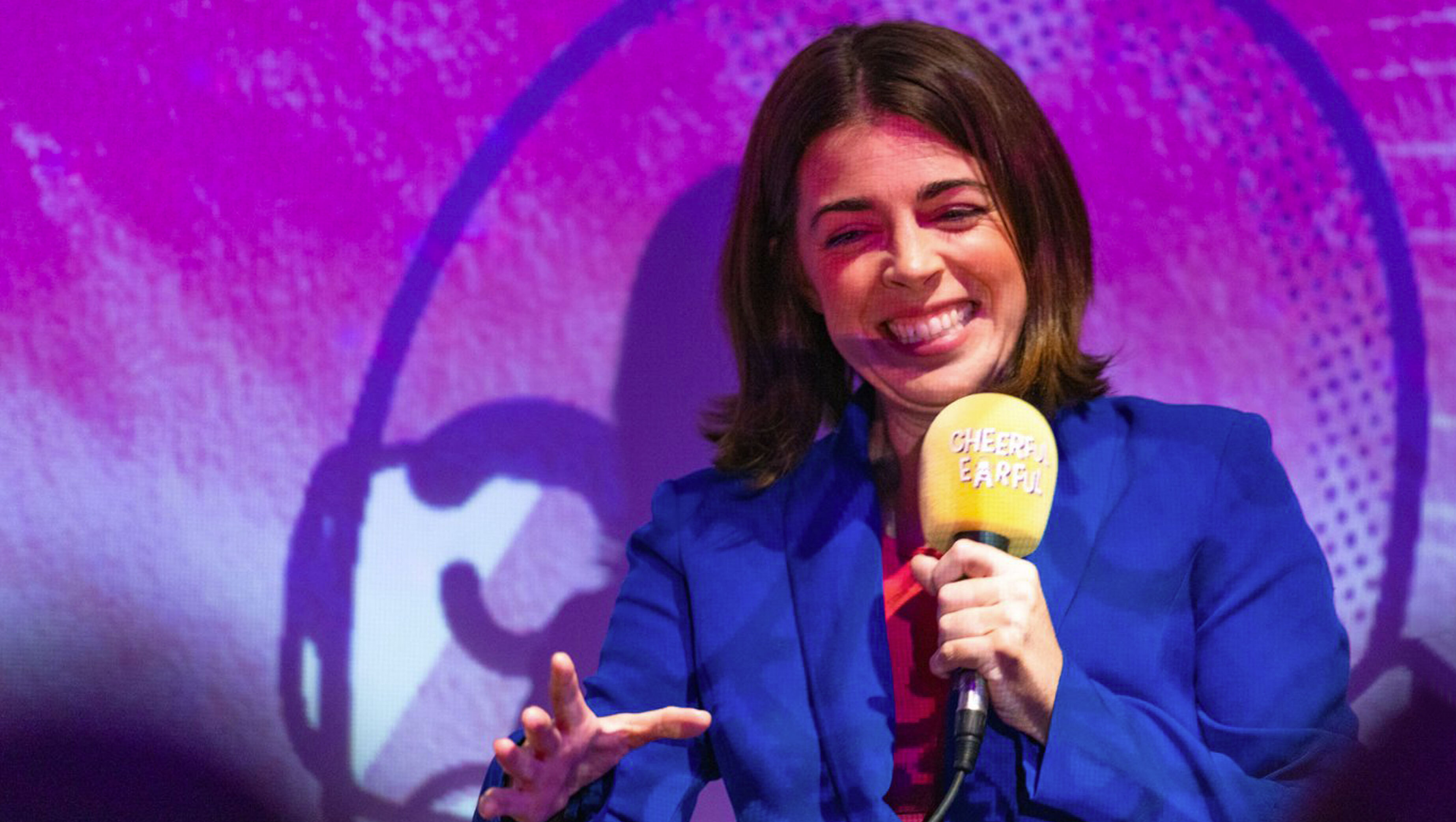 Alternatively you could look for a venue that already has plenty of experience hosting podcasts. Zoe Jeyes is deputy MD at Kings Place, which is not only home to the annual London Podcast Festival, but is also where The Guilty Feminist is recorded, plus all of Empire’s live shows, among many others. She believes that the kind of care and attention they are able to bring to people’s podcasts is key to why the likes of Imriel Morgan has curated three different festivals there, including the International Women’s Podcast Festival earlier this year. “Live podcasting is not just another form of performance or just two blokes sat on a stage holding microphones,” says Jeyes. “It’s a really unique art form and it works beautifully as a live event because podcasting is such an intimate medium.”

Remember the audience in the room

Whatever the format of your podcast, Jeyes believes it’s vital to make sure you make the most of the audience you have. “People are travelling to see you live, and looking for an experience that goes beyond them just sitting in their chairs,” she says. “The most important thing about doing a live podcast is: remember you have an audience in the room! The most successful ones build live interaction into the event, taking advantage of the fact that they have their fans there, and engage with the audience in whatever way that might be… Where it doesn’t work is when they do exactly the same as they’d do at home, and are more concerned about the recording they are going to get than the live experience.” 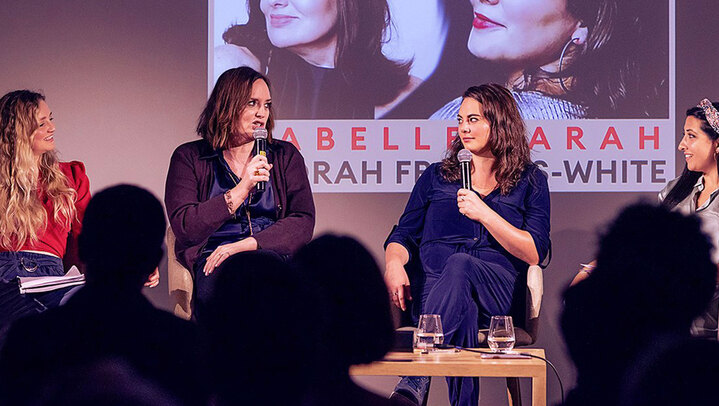 Crosby believes the audience can also be a very useful tool in itself for making sure your podcast stays on track, particularly for their panel show format. “Even though lots of sitcoms have moved away from having a live studio audience, very few panel shows have. They goad you on, into funny avenues. They help you edit and stop you disappearing into your own chat. Plus if an idea isn’t working you know immediately, and it pushes you to go ‘how can we make this work’ or ‘where do we need to go next, do we need to move things along?” While taking your show live is a potential new revenue stream, it can also involve some cost and risk. Gear recommends starting out with a smaller venue, rather than having too many empty spaces: “Rather than getting a 200-seater venue, you could just get a 30-40-seater one and pack it out,” he says, “and then ask your audience to chuck in a fiver or so to help cover the costs.”

Even a well-established and highly successful show such as Richard Herring’s Leicester Square Theatre Podcast looks to be prudent with costs. Producer Chris Evans of Go Faster Stripe lets us into a secret about the show, which is recorded live at the theatre on Mondays in front of an audience. “There are two guests each time, even though we pretend there’s one show a week – because it costs quite a lot to hire in the cameras, operators, staff etc.” Then they film for a run of typically 10-12 weeks, creating a buffer of shows to release.

“Don’t get too disheartened when you’re not packing out the O2,” Crosby adds. "There are lots of places where it doesn’t matter that there are only 25 people in the room.” 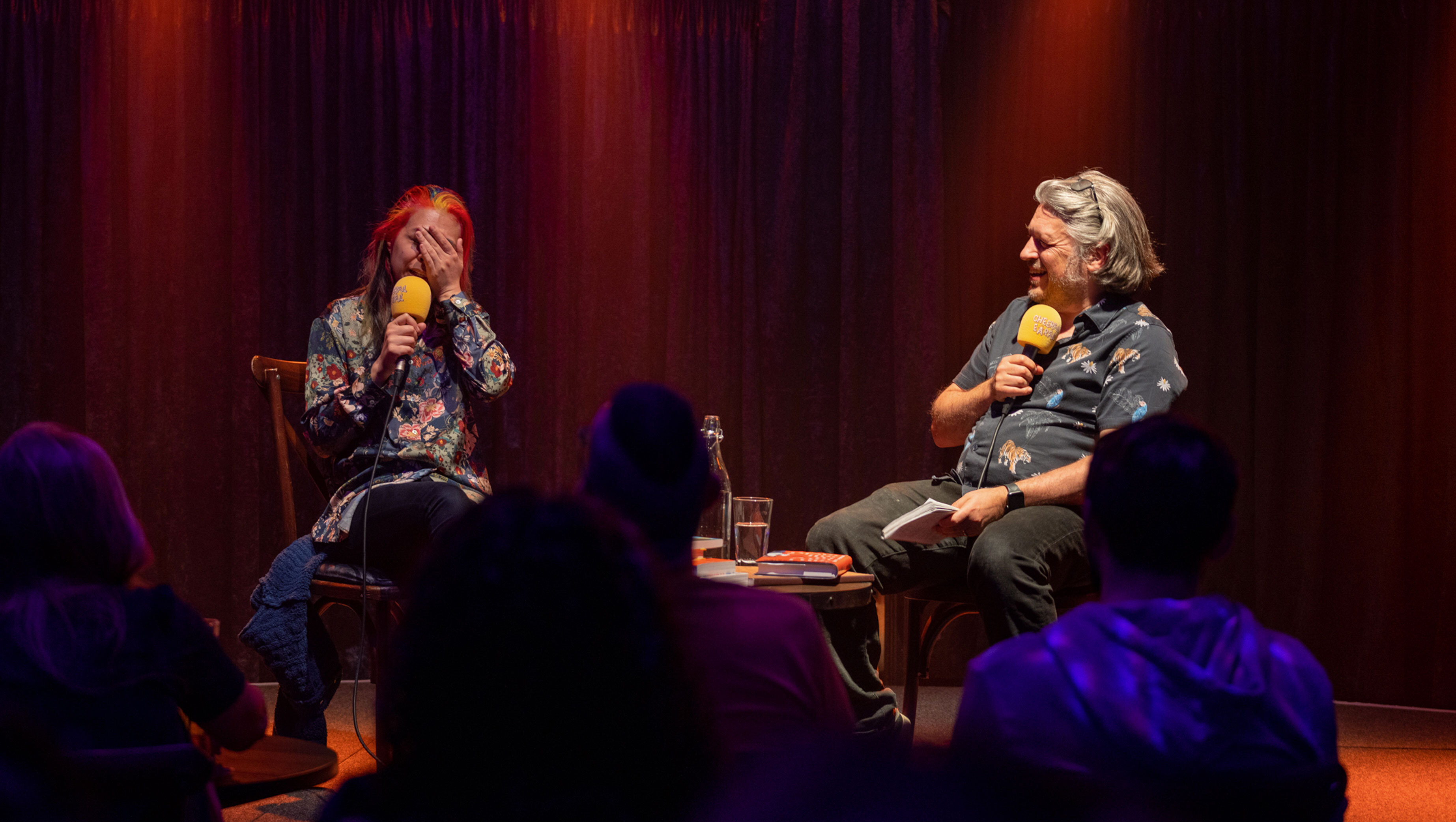 While many successful podcasts have spawned live events as extensions of the brand, the reverse is also true, and according to Deegan, podcasting can be part of a mix that helps to jack up interest in big live events. This is evidenced by the FIA’s branded podcast, F1: Beyond The Grid. “Suddenly the new owners are putting it on social media properly,” he says, “and you get those Netflix bonus TV shows about it. All of that helps F1 get into America or get more sponsors or whatever, and podcasting is a part of that.”

“The larger the event, the harder it is to engage with everyone in your audience,” adds Jeyes. “By providing them with fun, relevant podcast content can make them feel like they are part of it. You can give them behind the scenes access, to the programmers, or the coaches. People are always interested in the people behind the event, rather than just the event itself. It’s a great way to add a personal voice to something that can be faceless otherwise.”

What’s more, she points out, not everyone will be able to attend the event. “A podcast is a way you can talk to someone very directly and make them feel part of something. A lot of film festivals let you download the film and watch it at home, but listening to the podcasts as well gives you some of the experience you’d get if you were actually attending the event. And it’s the same with major sporting events.”

For Emma Corsham, who produces Pappy’s Flatshare, Ed Milliband and and Geoff Lloyd’s Reasons To Be Cheerful podcast and PodPod, it makes sense to create a podcast from a live show if you’re already recording anyway: “You’re going to the effort of putting five people on a microphone; it lives on for a lot lot longer than just a one-night live event. As a percentage of the cost of staging the event, it’s not going to cost you much to just hit record and then make it sound really nice and fun… and it can help towards the next event, and make sure people are really excited about going to the next one you schedule.”

How to record multitrack hybrid podcasts

Nielsen to incorporate Edison Research into its audio and podcast portfolio

Bauer audio boss to step down after 35 years